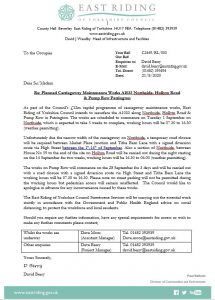 Patrington an ancient parish in the East Riding of Yorkshire includes the village of Winestead and the hamlet of Patrington Haven, the first meeting of the council taking place in January 1894, held in the long demolished Union Workhouse.  The village a centre for southeast Holderness is well known for its English Gothic church, known as the ‘Queen of Holderness’. First recorded in 1256.

The hamlet of Patrington Haven was sparsely populated in the latter half of the 18th century; by the mid 19th century with developments to the Haven, which lead to an increase in water born trade; it became a thriving community with granaries, coal and brickyards.

Winestead civil parish was added to Patrington, in 1935.  The village has a remarkable historic past.  Once fronting on to the River Humber, it was long associated with the Hildyard family, its ancient church stands near the site of a medieval moated house; a former three storied castellated house stood to the north of the village in the 16th century.

Words provided by Jeffrey Robinson and taken from his book entitled ‘In search of bygone Patrington’.